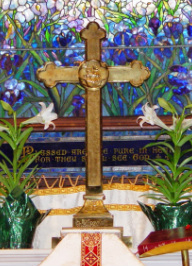 Mrs. Elizabeth Braine Guion died at age 58 and is buried in the Episcopal Churchyard Cemetery in Stockport. She knew much heartache, losing an infant daughter and also son who was only 16 years old. Her husband, Covington Guion died at age 33 after only a decade of marriage. Mr. Guion was a lawyer, a bank teller and a Junior Warden at the time of his untimely death attributed to “congestion of the brain”.

The widow Elizabeth Guion lived on another 26 years and saw two daughters grow up. The eldest, Euretta, married Col. James Burt in 1865. Her sister, Harriet, married Albert Gray in 1866. Albert Gray was the son of Reverend George Gray, who was the rector at Saint Paul’s from 1862-1865.

Remarks made at the 1876 Annual Convention by Rev. Robert VanKleek, Jr. state:

"The death of Mrs. Elizabeth Braine Guion removed one who, from the organization of the Parish, was closely identified with its growth and prosperity. A life so unreservedly given to the church could not fail to illustrate her sacred teaching. The poor and the afflicted found in her a true and sympathizing friend, ever ready to minister to their needs, both spiritual and temporal. Her works do follow her.”

Daughter Harriet and her husband [now Reverend] Albert Gray requested that an Altar Cross be the centerpiece of Elizabeth Guion's memorial gifts. The brass cross was fashioned and consecrated on November 2, 1877. The reverse reads: "All Soul’s Day 1877. In memoriam Elizabeth Braine Guion Sept 14 AD 1875.” The face is inscribed “Blessed are the dead who die in the Lord”. The center of the cross depicts a picture of the ‘Agnus Dei’ or Lamb of God which is an ancient symbol of Christ and his sacrifice.

Saint Paul's has been enriched by this memorial cross. We honor and cherish the memory of Mrs. Elizabeth Braine Guion and give thanks for her life, her devotion to God and to our parish.