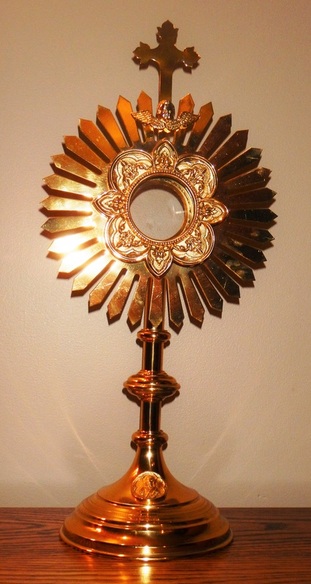 A monstrance, also called an ostensorium, is a vessel used to display a consecrated host during Eucharistic Adoration and Benediction of the Blessed Sacrament.

A former rector of Saint Paul's, Father Karl Kuhn, wished to have a monstrance for the season of Lent and, since they are quite expensive, he asked to borrow one from St. Mary's Episcopal Church in Lake Luzerne; (they had two). Reverend Susan Waldron and the Vestry of St. Mary's decided instead to give a monstrance to Saint Paul's as a gift in recognition of Father Karl and his wife Jen’s presence and in honor of the ministry of Jen’s parents, Chuck (Charles) and Judy Griswold.

Chuck and Judy Griswold attended St. Mary's from 2003-2009, during which time Chuck established a weekly luncheon for the community. What started as a small gathering quickly grew, and they continue to hold the lunches even though the Griswold’s had moved away.  Chuck and the rectors desired to offer the luncheons as a gift to the community, so that none would feel unable to attend for lack of money. These meals are a tremendous blessing to the Lake Luzerne community.

The word monstrance comes from the Latin word monstrare, which means ‘to show’.  From this word, we get "demonstrate", which means "to show clearly". A monstrance includes a center transparent area that contains the wafer element, newly consecrated, transformed into the Body of Jesus Christ. This center sphere is surrounded by decorations appearing like the sun’s rays emanating.  This sun design represents Christ’s resurrection, his rising to Glory following his earthly death.

Once a priest consecrates the wafer of bread during the communion process, it turns into the literal  body, soul and divinity of Jesus Christ.  It being no longer just a piece of bread, this representation of Christ is worthy of adoration and worship. The ceremony of consecration, changing the host from a wafer into the body of Christ is called transubstantiation, which Jesus taught to the disciples at the Last Supper.  The disciples were anointed with the power to change the wafer into the body and the wine into the blood of Christ for communion, and this authority has been and continues to be passed on through priestly ordination.

Transubstantiation is supported by the book of John 6:51-55: “I am the living bread that came down from heaven. If anyone eats of this bread, he will live forever. This bread is my flesh, which I will give for the life of the world. Then the Jews began to argue sharply among themselves, “How can this man give us his flesh to eat? Jesus said to them, “I tell you the truth, unless you eat the flesh of the Son of Man and drink his blood, you have no life in you. Whoever eats my flesh and drinks my blood has eternal life, and I will raise him up at the last day”.

The bread and the wine being consecrated and consumed in this ceremony is referred to as the Holy Eucharist.  Eucharist comes from the Greek work Eucharistia, meaning "thanksgiving". By consuming these sacraments, we are thankfully confirming our connection to the spiritual life and mystical body of Christ.

The Blessed Sacrament is the devotional name referring to the Host after it has been consecrated, during the sacrament of the Eucharist.  Adoration is the devotion of worshiping Jesus Christ, believed to be present and represented by the consecrated Host or Blessed Sacrament. The monstrance is the vessel designed to highlight and honor the sacred host during Eucharistic Adoration.

Adoration is the highest form of worship, an act of reverence, glory and honor. Eucharistic Adoration is setting aside a period of time, usually on a weekly basis to spend time with God through the Blessed Sacrament.   Jesus has invited us to do this when he said “Come to me, all of you who are weary and heavy laden. Come to me and I will refresh you.”

During the solemn service including Adoration of the Blessed Sacrament, the monstrance is located on the altar, flanked by candles. Worshipping includes psalms and prayers, alternating with long periods of silent reflection and prayer.  During the Magnificat, the thurifer censes the Blessed Sacrament and the bells are rung three times. Following this, the Priest, with veiled shoulders, arms and hands, lifts the Monstrance and blesses the kneeling congregation using the sign of the cross.  During the Benediction, the divine praises are read, including ‘Blessed be Jesus, in the most Holy Sacrament of the Altar’.