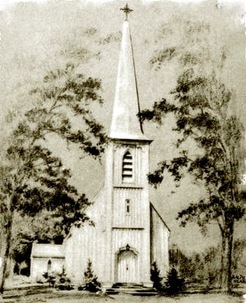 The Episcopal Church has deep roots in New York State. Before the American Revolution, many residents of the area were members of the Church of England, the Anglican Church.  In 1789, after America became independent, they became members of the newly established Protestant Episcopal Church. (Same beliefs, but with a new name, reflecting a new cultural identity as part of a new country.)  Many local Episcopalians attended services in Hudson and Stockport, and held early services in the Dutch Reformed Church in Kinderhook.  About 1840, Bishop Onderdonk of New York baptized the first Episcopalian locally, and in 1850, regular services began in Kinderhook in borrowed quarters.

On January 18, 1851, our parish was incorporated under the name, "The Rector, Church Wardens and Vestrymen of St. Paul's Church in the town of Kinderhook in the County of Columbia."   The Rev. Frederick T. Tiffany was elected rector, along with two wardens and nine vestrymen.  There were twenty-nine other members, forty-one members in all.  Some of the first parishioners had broken away from the Dutch Reformed Church of Kinderhook.  The first parishioners were a diverse group, representing Dutch, English, and French Huguenot ancestry.  The new congregation made plans for a church building on a lot donated by vestryman David Van Schaack, a site on present Chatham Street (Route 9) located just north of the present village hall.  The congregation selected Richard Upjohn to design the new church.  Upjohn was the leading church architect of his day, the architect of the new Trinity Church at Broadway and Wall Street in New York City, and a promoter of the Gothic Revival architectural style.  The design of St. Paul's followed closely the drawings in Upjohn's book of plans, Upjohn's Rural Architecture (1852).  Upjohn's designs for Episcopal churches in Columbia County include edifices in Clermont and Copake Falls.

The new church was completed at a cost of approximately $8,000, and consecrated on June 22, 1852, by Bishop Carlton Chase of New Hampshire, acting for the Bishop of New York.  Trinity Church loaned the new parish $1,000 in 1852 toward building expenses, and renewed the mortgage in 1870, 1889 and 1909, until that congregation generously forgave the mortgage in 1910.  St. Paul's was considered a mission church during its early years. Its annual offering was not great, and the parish depended on gifts from generous members and aid from the Diocese.  In 1857, a house and land on Sylvester Street were purchased for $3,000, and this house today serves as the rectory.  A bell for the belfry was purchased and installed in 1857, and oil lamps to illuminate the interior of the church were donated by the women of the church in 1859.

The village business district in the 1860s was a crowded place; the church lot was small, and expensive foundation work had to be done.  In 1868-69, it was decided to dismantle and reconstruct the church at a cost of $2,200 on the newly purchased land on Sylvester Street. Upjohn advised the parish on the reconstruction.  The church as rebuilt is somewhat different from the original 1852 design.  The tower was relocated symmetrically on the front end of the church, rather than on the side.  Wood paneling and wainscoting were added inside, although Upjohn's stated preference for his churches had been plain, white plastered interior walls.

In 1868, the Diocese of Albany was set off from the Diocese of New York. In 1870, all pews in the church were made free (the previous custom, prevailing in most churches, was to rent the front pews to individual families or parishioners for their exclusive use). In 1900-01, a two-story addition including a kitchen was added to the rectory, with funds raised by the women of the church. Additional property was purchased on the north side of the church in 1904 for $900, including the present sexton's house. In that year, also, electricity was installed in the church.

In October 1912, the Rev. John Carl Jager became rector and remained a beloved pastor for nearly twenty years. He conceived the idea of the parish house to accommodate the activities of the growing congregation. The parish house was a busy and active community center. As originally built, it included a rector's study, Sunday school classrooms, a library, choir room, gymnasium and a bowling alley! During this period from 1915-1931, the church was the beneficiary of many gifts in legacies and memorials. The Rev. Jager was granted a six months leave of absence to serve in the Y.M.C.A. for foreign service in World War One. This leave was extended, and it was not until July 1919 that he returned from France. The period from 1919 to 1931 was a readjustment following the war. In 1928, a gift made it possible to renew the church's foundations, build the entrance steps of permanent flagstone, and paint the church. In burning off the old paint, a fire broke out under the roof, but prompt action by the village Fire Company saved the building. In cleaning and repairing the interior after the fire, an interesting old blue painted board ceiling was hidden by the present plaster board ceiling. The Reverend Jager passed away on July 5,1931, having given St. Paul's Parish its longest rectorship to that time. He is buried under the altar of St. Paul's.

In October 1931, the Rev. John Lee Roney became rector. During his rectorship, the Altar Guild and a long hoped for vested Choir was established. He resigned in 1937, and the Very Reverend Charles Smith Lewis, Dean Emeritus of Cathedral of All Saints, Albany who lived in Kinderhook, was asked to temporarily take over the duties of rector. He finally agreed to stay permanently and was rector until his death in April 1942. On November 12, 1939, the vestry passed the resolution which changed the qualifications so that women "of full age, belonging to the parish, who have been regular attendants at its worship and contributors to its support for at least twelve months prior to such election or special meeting, shall also be qualified to vote at the Annual election or Special Meeting of the said St. Paul's Church in the Village of Kinderhook."

Canon Glyn Thomas became rector in September 1942, and his third daughter Bridget was born in 1944. His health was not good and he was given a year's leave of absence in 1947 and another leave in 1951. On Palm Sunday, April 11, 1954, Canon Thomas suffered a heart attack and died on April 23. A bronze plaque was installed in the church in his memory. He was succeeded by Rev. Harold F. Hohly, Rector of Christ Church, Bronxville, New York. In 1961 land south of the Rectory was purchased, which is today used as a parking area and lawn. In 1964, the Rev. Hohly donated the columbarium and its landscaping and planting as a memorial to his wife, Helen Wade Hohly. He retired in 1964 and remained in Kinderhook until his death in 1968, when he was interred in the Garden of the Resurrection. The Rev. Alselm Broburg became rector in June 1964 and served St. Paul's until September 1966.

In February 1967, the Rev. Edward John Fiebke, from St. Marks, Malone, N.Y. accepted the rectorship of St. Paul's. He remained rector until his retirement January 1, 1996. Extensive repairs were made to the organ in 1967. In 1968, Carolyn Davie Lloyd died, leaving a generous trust bequest to St. Paul's in memory of her parents, Amalia and George Henry Davie and her aunt Carrie Dummig. Income from the trust is for the general use of St. Paul's Church.

In 1988-89, the old parish house was demolished and the present McNary Center was built, accompanied by a major fund raising effort and aided by the generous bequest of Lucy McNary. The McNary Center serves both the parish and the entire community as a modern meeting place.
Proudly powered by Weebly