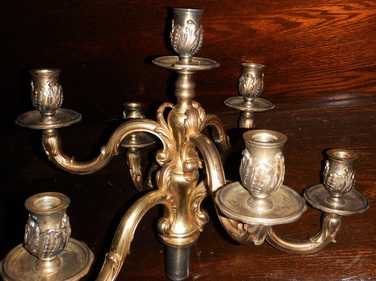 During holidays or special events arms are added to the candelabras which flank the altar.

The inscription along the base of the candelabra reads:
“1857 To the Memory of Mortimer and Sylvia De Pau Livingston 1890”

Research reveals only one link between the Livingstons and Kinderhook in that they are distant relatives to Thomas Beekman who, at one time, resided in what is now the Rectory. It is not known when or by whom the candelabras were donated to Saint Paul’s.

Liturgical candles are traditionally made of some, or all, beeswax. According to the New Advent Catholic Encyclopedia: “The pure wax extracted by bees from flowers symbolizes the pure flesh of Christ received from His Virgin Mother, the wick signifies the soul of Christ, and the flame represents His divinity. Although the two latter properties are found in all kinds of candles, the first is proper of beeswax candles only.”  Also, the symbolism of prayer has been connected with candles; the burning flame of the candle represents the prayer that rises to God.

It is proper to light at least two but generally four or six candles for all the services on the altar or surrounding it. Acolytes, also known as taperers, enter in the procession carrying candles. One reference noted that it was not permitted to begin Mass before the candles are lighted, nor are they to be extinguished until the end of Mass. If the candles go out before the Consecration, and cannot be again lighted, most authors say that Mass should be discontinued.  If this happens after the Consecration, Mass should not be interrupted, although some authors say that if they can possibly be lighted again within fifteen minutes the celebrant ought to interrupt Mass for this space of time.

During Saint Paul’s Christmas Eve Midnight Mass there is a moment when the electrical source of lighting is extinguished and the entire church is filled with candlelight. As we admire the light that comes from the altar candles, we are reminded of John 12:46.  Here Jesus says, “I am come a light into the world, that whosoever believeth in me may not abide in the darkness”. - American Standard Version (1901)