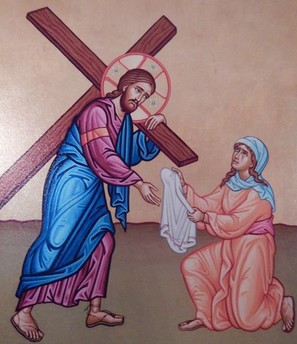 Stations of the Cross - Roy Roberts

The Stations of the Cross, The Way of the Cross, The Way of Sorrows or, simply, The Way, is a series of artistic representations depicting Christ Carrying the Cross to his crucifixion. In most churches these are small plaques with reliefs or paintings placed at intervals along the side walls of the nave. The traditional chapel devotion began with St. Francis of Assisi and extended throughout the Roman Catholic Church in the medieval period. It may be done at any time, but is most commonly done during the Season of Lent, especially on Good Friday.

The object of the Stations is to help the faithful to make a spiritual pilgrimage of prayer, through meditating upon the chief scenes of Christ's sufferings and death. It has become one of the most popular devotions, and is often performed in a spirit of reparation or ‘making amends’ for the sufferings and insults that Jesus endured during His Passion.

The depictions on the plaques are as follows:
We are blessed at Saint Paul’s to be so reverently reminded through this gift of the sacrifice of Jesus Christ. “Obtain for me the Grace to understand the Mystery, the Wisdom and the Divine Love as I go from scene to scene….What a price He paid to cover my sins, to open the gates of heaven for me and to fill my soul with His own spirit.”  (written by Mother M. Angelica, P.C.P.A)

The Stations of the Cross plaques that are consecrated at Saint Paul's are in loving memory of Roy Roberts. They are gifted to us by his family: wife Ruth, sons Bruce and Keith Roberts, and daughter Susan Anderson.  Roy was a lovely man and a merchant marine by trade who had traveled the world over.  Ruth reports he was born in Wales in 1914 and came to the United States at age 9. He left for sea at age 13 after completing the 8th grade! His education continued through the Merchant Marine Academy, achieving the top title of ‘Commander’.   He had a delightful accent which made it easy to listen as he told stories of his many travels or the beloved camp up North.  Roy left this earthly world in 2006 and his remains were interred in the Columbarium.