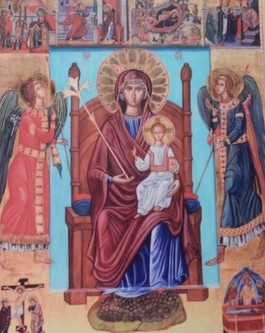 Mary was a woman of Nazareth in Galilee, who lived in the later century BC and early 1st century AD.  She is identified in the new testament of the bible as being the mother of Jesus through divine intervention.

In the village of Walsingham in Norfolk, England, in 1061, Mary appeared as a vision to a pious English noblewoman Richeldis de Faverches, the lady of Walsingham Manor, three times. She was commanded to build a replica of Mary’s home in Nazareth where the annunciation took place (Mary's visit from the Angel Gabriel).  Lady Faverches gave the order to erect it but it is written that she awoke one morning and found angels miraculously building! This holy house built on Lady Richeldis’ property in Walsingham became a shrine and a focus of pilgrimage.

In 1538, the Shrine at Walsingham was destroyed and the statue of the Virgin burned.  The shrine went through many uses and  changed hands but by the end of the nineteenth century, it was once more recognized as a shrine and Holy Home to our Lady.

In 1921 Father Alfred Patten, the Church of England Vicar of Walsingham created a statue of Our Lady of Walsingham.  This was placed in the Parish Church of St. Mary and is a beautiful site of pilgrimage, those wishing to pay homage to Mother Mary.

In St. Benedict's chapel of the McNary Center, a consecrated icon in honor of Our Lady of Walsingham is placed in remembrance of Father Karl Kuhn's pilgrimage in 2011.  Father Karl, a former pastor of Saint Paul's, pointed out that in all images of Mary, she is always pointing us to Jesus.

A prayer for the Feast of the Assumption:
All Holy and ever-living God, in giving us Jesus Christ to be our Savior and Brother, You gave us Mary, His Mother, to be our Mother also; grant us, we pray you, to live lives worthy of so great a Brother and so dear a Mother, that we may come at last to you the Father of us all, who lives and reigns forever. Amen.   Our Lady of Walsingham, Pray for us.