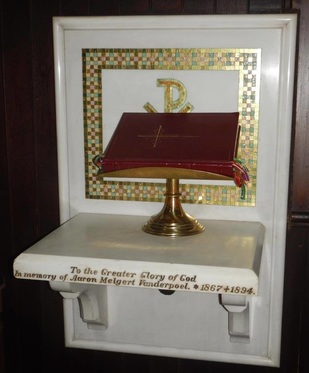 Aaron Melgert, son of Aaron John and Adaline Vanderpool, was born in Kinderhook on January 16, 1867.

According to an obituary and article in the Hudson Daily Evening Register (Saturday May 5, 1894) Aaron Melgert Vanderpool was an 1890 graduate of  Trinity College and was engaged to Miss Bessie Morgan of NY.  His death apparently occurred while he was riding his bike and was accidentally thrown in front of a horse drawn car.  His death happened suddenly during is 27th year while in Hartford Connecticut on May 4th of 1894.  The obituary said he "was thrown in the track in the front of the car, behind the horses" and that "the wheels of the car passed over his head."

This, being very unfortunate was also rather ironic as at the time of his death, he was the Assistant Superintendent of the Hartford Rubber Works Company which transitioned into what is now known as the Dunlop Tire Company. In 1894, Hartford Rubber Works was connected with the Pope Manufacturing company which a year later introduced the first gasoline powered 'horseless carriage' in Connecticut.

In his honor and as a memorial, his mother the widow Adaline Vanderpool donated the marble credence table we still use today.

A credence table is a small table or shelf made of marble or wood, placed on the epistle side of the chancel and is used to store the elements of Communion.  The word, credence, comes from a Latin noun 'credens' meaning believer.  It is also the root of words like credentials and credibility.  Outside of church, a credence table or credenza was a sideboard table where food was to be tasted or sampled for poison before serving nobility.

Again, St. Paul's is very fortunate that this Vanderpool family was part of the Parish from the very beginning. Our precious credence table adds much beauty to the sanctuary.  As far as the meaning of the root word, 1Timothy, chapter 4, verse 12 tells us "in speech, conduct, love and purity, show yourself an example of those who believe."