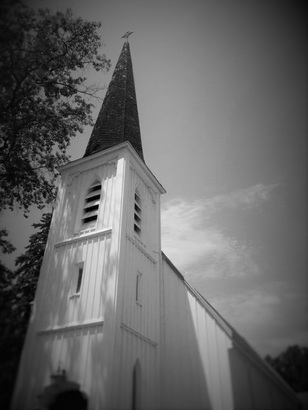 After the turmoil of Reverend Page, the Parish and Vestry welcomed Reverend Porter Thomas.  He remained for the next three years during which time the Parish improved in numbers as well as finances.

During this time, the church bell was purchased and placed in the belfry over the narthex. The cast metal “Jones & Hitchcock” bell was made in 1857 at the Troy Bell Foundry. It is reported to have cost $400.  It weighs over 1000 pounds!

The name ''Baptism of Bells'' has been given to the ceremonial blessing of church bells because of the washing of the bell with holy water by the Bishop.  This is followed by anointing it with oil and a fuming thurible is then placed under it. The Bishop prays that these sacraments of the Church may, at the sound of the bell, "put the demons to flight, protect from storms, and call the faithful to prayer".


With the bell situated high in the church steeple tower, the sound can carry over long distances. Before emergency services such as fire sirens and weather alerts, church bells served as a signal of alarm to the community. In the book “Stories of Stuyvesant” by Juanita Knott, (mother of Sue Brignull), it is recorded that during a major fire in 1880 “the ringing of the reformed church bell brought others and soon over 200 citizens formed a bucket brigade.”

A rope located in the narthex is attached to a mallet which, when pulled, strikes the bottom of the bell. Saint Paul's bell is rung
seven times 15 minutes before Mass begins, then five times 5 minutes before Mass. This custom is to announce to the faithful the upcoming service, and it is followed by a ringing three times upon the arrival or entrance of the officiating minister, signifying the start of the event. The bell also peals during wedding ceremonies and, during a funeral procession, the ‘passing’ bell tolls the one time for each year of life.

During Evening Prayer, the bell is rung in conjunction with praying the Angelus prayer. There are three rings for the introduction, once for each verse and the bell rung nine times with the closing of prayer.

Additionally, there is another, smaller, belfry over the apse (where the altar stands).  This smaller bell was rung during the consecration of bread and wine.  An Acolyte would pull on the rope, turning a large wheel in the belfry,  allowing the clapper to strike the body of the bell. The ringing of the bell during the Elevation of the Host and Wine signifies to the congregation that the bread and wine have now been turned into the Body & Blood of Christ. The sounding of the bells during the Eucharist provides a joyful noise to the Lord, as a way of giving thanks to the miracle taking place on the altar.  Some years ago, this bell rope broke.  While it awaits repair, the hand-held Sanctus bells are used. 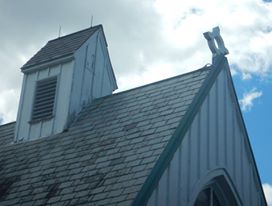 The blessing of the bell:
Lord, from the beginning of time your voice has called to us, inviting us to communion with you, teaching us the mysteries of your life, guiding us on the way to salvation. With silver trumpets Moses summoned Israel to gather as your people. Now you are pleased that in the Church the sound of bells should summon your people to prayer. By this blessing accept these bells into your service. May their voice direct our hearts toward you and prompt us to come gladly to this church, there to experience the presence of Christ, listen to your word, offer you our prayers, and both in joy and in sorrow be friends to one another.  We ask this through Christ our Lord. Amen."
Reverend Porter Thomas

During Reverend Porter Thomas’ tenure, the church was growing and trying to improve financially. A notation from the October 19th 1861 vestry meeting minutes states that it was unanimously resolved that in addition to the pew rental already being levied, a “collection in aid of the funds of the parish be taken up in church every Sunday morning”. In that same year, the rector's annual salary was  increased from $550 to $650 and the sexton's pay was raised to $50 from $25.

Reverend Thomas’ resignation was tendered May 7th 1862. The Civil War had begun the previous fall, and he had accepted an appointment as Chaplain in the 51st regiment of NYS volunteers.

With beautiful penmanship, Franklin G. Guion, Clerk of the Vestry, documented the minutes of the meeting describing Reverend Thomas so eloquently:

"The Vestry resolves that the said resignation be accepted.

Resolved that in accepting the said resignation, we deeply lament this act of separation from one whose unreproachable character, amiability of disposition and Christian courtesy have endeared him; to us, to the parish and to the community, in all the relations of pastor, friend and fellow citizen.

Resolved that we would be doing injustice to our own feelings and to those of the church which we represent, if we did not publicly bear testimony to the earnestness, ability and fidelity with which the reverend Mr. Thomas has discharged his various parochial duties.

Resolved that the Reverend Mr. Thomas has our most cordial wishes for his happiness and prosperity in his new field of labor, where we trust that our loss may be more than counterbalanced by his gain.

Resolved that a copy of these resolutions, signed by the wardens and vestryman, be communicated to Mr. Thomas and that they be published in the Kinderhook Rough Notes."