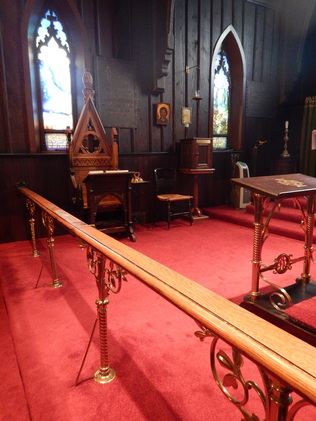 An altar rail is usually made of wood, marble or metal and sets off the chancel or sanctuary from the remainder of the church.  It requires a gate to allow entrance of the officiating clergy.  Also called a communion rail, the railing facilitates kneeling which is a beautiful form of devotion to our Lord as scripture suggests that communion be received on our knees.

The word “sanctuary” comes from the Latin word Sanctuarium, meaning a sacred place.  Symbolically positioned at the head of the church, the sanctuary is set apart from the rest of the church and represents Christ as the head.

Some say the altar rail is a marker of the place where heaven and earth meet. The rail is low...it is accessible and has a gate.  We, as parishioners are not prevented from joining or participating in this little bit of heaven.

The plaque reads:
For a memorial in the house of the Lord to Aaron J. Vanderpoel 1887

Aaron John Vanderpoel was a prominent lawyer, born in Kinderhook in 1825.  He married Adaline and although he practiced predominantly in NYC, they owned a Kinderhook home on Broad Street as well as a farm and 400 acres which lie a couple of miles northwest of the village.

His obituary states he died of apoplexy while in Paris, France, during a family vacation.  Apoplexy is the early term for a cerebral vascular accident, (CVA), or stroke.  He died within hours of his stroke event, had a well-attended funeral back in NYC and was buried in the Kinderhook cemetery.

Many wonderful things are documented about Mr. Vanderpoel.  He had an excellent reputation and was well respected as a lawyer. He was described as  “gentle, kind and polite” in tributes including one in the minutes of a NYS Bar Association meeting.